Plum blossoms were one of the first flowers that bloomed near me when I was living in Japan.  They actually bloomed before the cherry blossoms, which Japan is so famous for. Having never seen a plum blossom before living in Japan, I didn’t know that they were such a bright fuschia color. They can be darker or lighter and multilayered too. Of course, that makes plum blossoms a favorite motif for tsumami kanzashi and a lot of other Japanese art forms.  Plum blossom hana kanzashi are generally worn  by maiko during the months of January and February.

I went a little overboard with the plum blossoms and ended up making five hairpins with this flower, which are now available in The Shop. If you want to know more about how these were made, please keep reading!

A lot of tsumami kanzashi I’ve seen in the past have had backgrounds filled with artfully arranged glitter wire or mizuhiki. I’ve always wanted to try something similar, so the first hairpin that I made was a dark single layer blossom with gold mizuhiki ‘outer petals’. The mizuhiki isn’t too difficult to bend and shape, but it was a little bit tricky trying to get the cords to stick firmly under the petals. They are delicate, but I think that I’ve managed to get them firmly in place now.

The second hairpin is also the darker plummy red shade, double layered, with a gold filigree beadcap and swarovski crystal center.  I’ve been trying to make sure that each pin, although unique, takes roughly the same amount of work to produce. So, even though the first hairpin is completely different from the second one, they are both priced the same at $10 each. 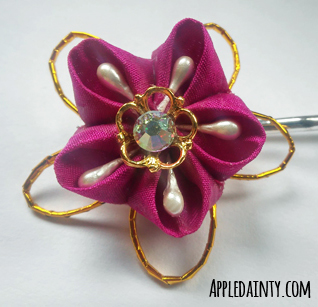 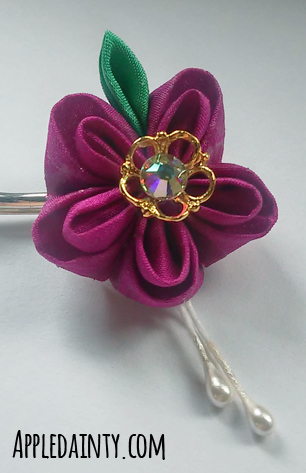 The third plum hairpin is double layered, like the last one, but the second layer of petals is lighter pink instead of the darker plum red. This pin also has some silver glitterwire, a silver beadcap and swarovski crystal center.

The fourth and fifth pins are relatively similar and gave me the chance to do something I’ve never done before. I made shidare for both of these pins. Shidare are the falls that you often see on larger tsumami kanzashi pieces, especially used for making wisteria. They usually have a bell at the end of each fall, which I used on the fourth plum hairpin. 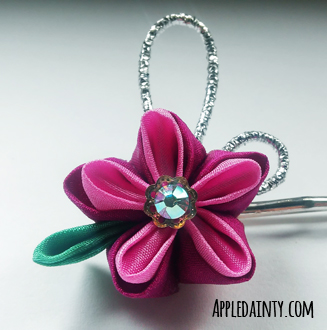 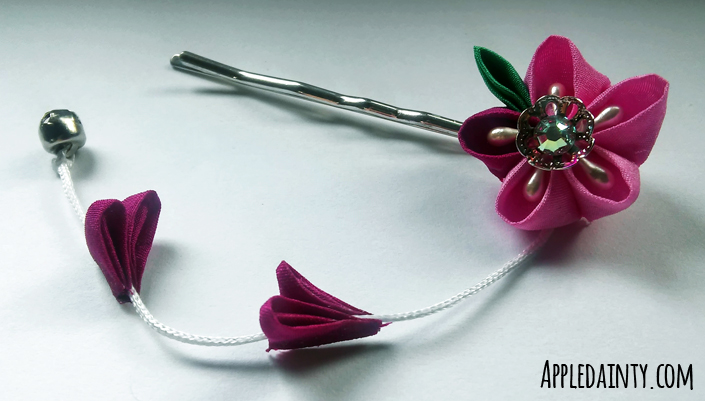 But, for the fifth pin I added something a little different. I used a curious silver toned bead that I’ve had in my collection of bits and bobs for eons. I’m not even sure when or where I got this bead cap with tiny fluttering chains, but I’d always pictured using it on one of my kanzashi pieces. I am really happy to have finally found a place for it.

Which of these plummy pins are your favorite?