It’s be nearly a year since I finished the first set in my Vox Machina Reliquary collection, which is a bit longer than I’d intended it to take. Critical Role is well into Campaign 2, and it’s hard not to get distracted by ideas for campaign two characters. Nonetheless, I’m very pleased to be sharing this bridal themed Pike Trickfoot set with you – The Dawnflower’s Trousseau.

I had been debating which character to work on next when Brian W Foster and Ashley Johnson announced their engagement. I had originally wanted to do a more elaborate halo-themed piece for Pike, but the idea of doing a wedding-themed piece for Pike just felt right. I had been intending on doing a sash for Scanlan, which might now be wedding themed as well, though at the moment I’m feeling especially jazzed at the thought of doing a tour guide hat for Grog. We’ll see what comes next! 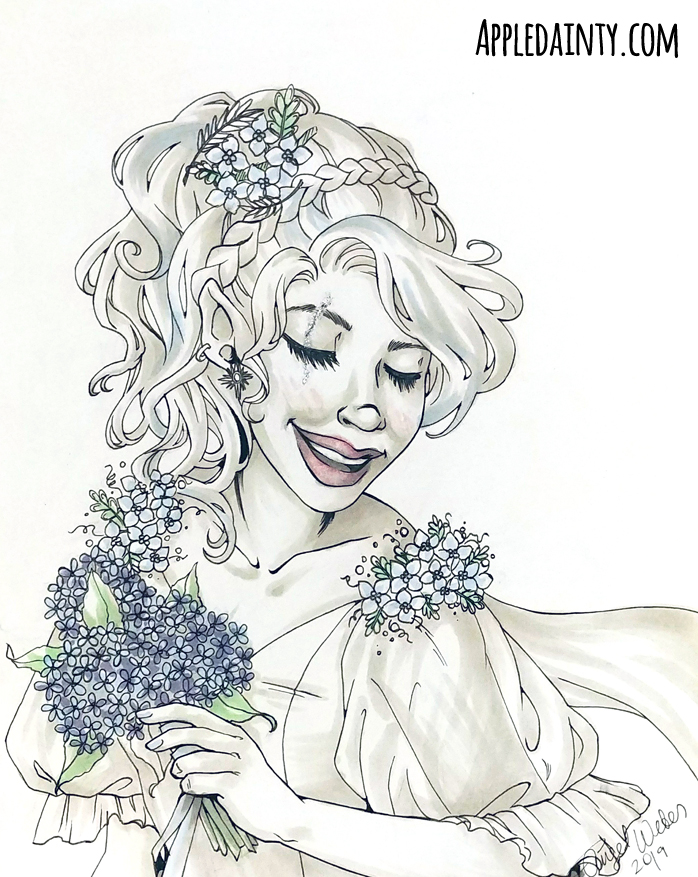 Like with The Voice of the Tempest, I crafted the kanzashi first, then drew the portrait after. I’m not the most confident colorist, but I thought it would be nice to give the portrait an old-timey sepia tone feel with highlights of color.

The kanzashi itself is a hydrangea with faintly blue resin and silver leaf petals, bright green foliage, and white feathers. I also made a matching boutonniere for Brian, which includes one of my old drawing nibs. Brian is a writer, and I thought even if it’s not a writing nib, poetry is a bit like drawing with words, so maybe it will share some artistic energy with him.

Oh, and the boutonniere also glows in the dark a bit (after being exposed to sunlight). That way Brian can #stayturnt #afterdark

Anyway, I tried a few different glow in the dark paints, but FolkArt brand SUPER GLOW was the best. I highly recommend it. 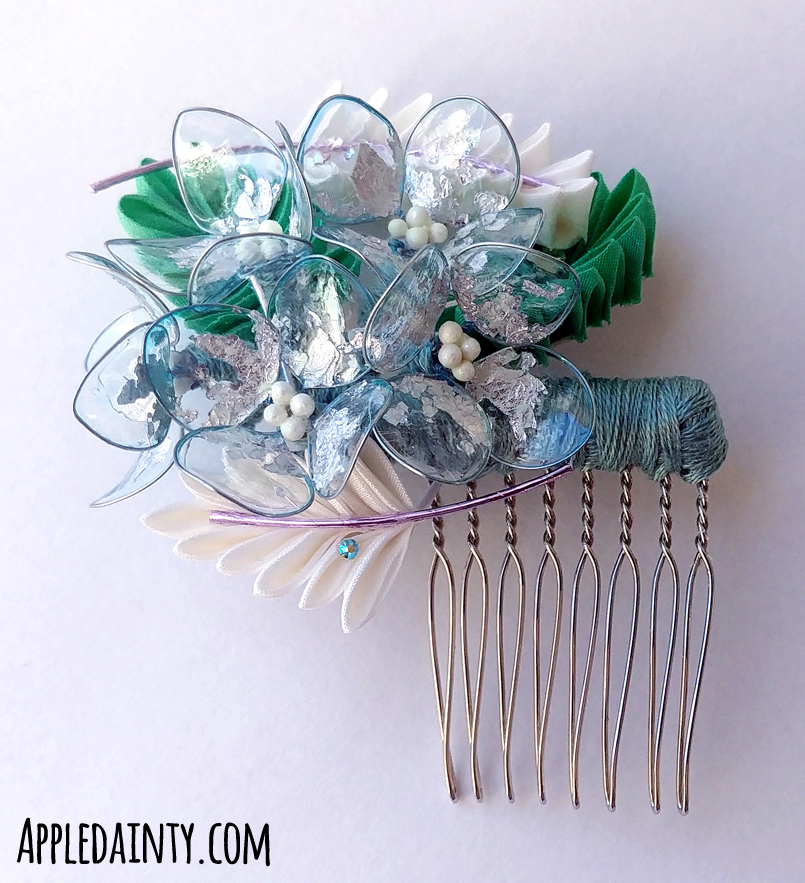 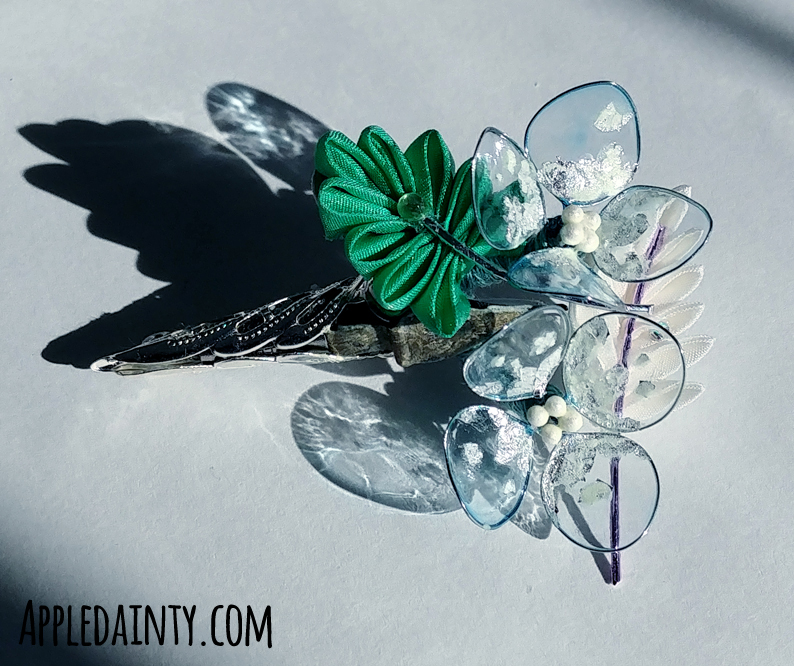 I knew I was going to do simple packaging for these pieces – plain brown card boxes with white lace and silk satin ribbon – and trousseau’s normally contain linens. I already had a few extra handkerchief blanks, so I thought I’d embroider one with a simple hydrangea design and Brian’s catch phrase.

I’m also going to do a Scroll of Authenticity, but I’m not planning on getting photos of it since it’s going to look pretty similar to the one for The Voice of the Tempest.  The ‘in-character’ explanation for this piece is that it was made by Ellie (my jeweler character) based on second-hand descriptions of Pike and Scanlan’s wedding; legend has it that the original Dawnflower’s Trousseau mysteriously appeared in Pike’s room the night before her wedding, and was supposedly a gift from Sarenrae.

None of this is canon of course. I’ve always felt weird about fanfiction and inserting my own characters into someone else’s story, but I thought it was kind of fun to incorporate a little story into the pieces – especially exploring the idea of other characters learning about the story of Vox Machina long after they’ve gone.

It makes me think of how I sometimes discover posts on reddit discussing the original Dolyak Parade in Guild Wars 2 and laughing at how much they have right and or wrong. For the record, it happened during a week when Tarnished Coast, Crystal Desert and Fort Aspenwood were together in WvW. I was on Crystal Desert, made a funny post about people murdering me when I was walking dolyaks, and someone from Tarnished Coast suggested doing the parade.

I didn’t expect anyone to show up. I thought for certain me and my handful of guildies would show up at the meeting spot and immediately be murdered. Tons of people showed up and we didn’t end up getting killed until the end, when an FA zerg gloriously blobbed us down.

I started the DOLY guild to arrange weekly parades, which was taken over by Handin when I started working more and gaming less. I made the Still A Yak video as a gift to the people of Crystal Desert when our guild decided to move servers.

Anyhoo, I think that’s enough about my fifteen minutes of interweb fame.  I’m excited to ship these gifts out next week, and looking forward to starting on the next reliquary. I’ve also got lots of kanzashi on the go, new silk arriving next week, and hopefully I’ll find out my scheduling for Anime North soon.

If you like this blog and want to help support it, consider buying me a coffee. Your support is greatly appreciated, and I hope that you check back again soon for more art, crafts, and creativity!