Of Cufflinks and Wedding Bands

My fiance* and I are huge geeks and also gamers.  In fact, we met while playing an MMO; insert your own joke here about love stories in the age of the internet.  While we both love geeky things, we are a little on the traditional side and didn’t want a geekery-themed wedding.  Instead, we decided on some subtle touches that spoke to our love of games.  That said, when it came time to look for a wedding gift for Dave, and for his wedding band, I looked first to jewelry that spoke to this passion for gaming.

I decided pretty quickly on getting him cufflinks for a wedding gift.  I wanted to get him something Star Wars themed, since he is obsessed with Star Wars.  He told me many times that he likes the Old Republic symbol (it is blue and white I believe), and I thought that it would make a pretty good cufflink design. 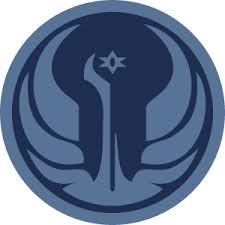 Old Republic symbol. I call it the star birdy thing.

After a little google-fu, I soon found Austin Moore of Earth Art Gems.  He has a really awesome portfolio of work, including lots of geek-themed jewelry, and seemed like the perfect person to reach out to regarding creating these Star Wars cufflinks.

Austin is very friendly and cooked up a CAD design for me at lightning speed.  I showed the CAD to Dave and he was thrilled, so I went ahead and ordered them. 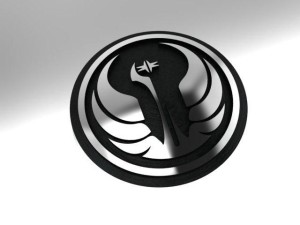 Austin’s Original CAD of the design.

Just a few weeks later, they arrived at my house. 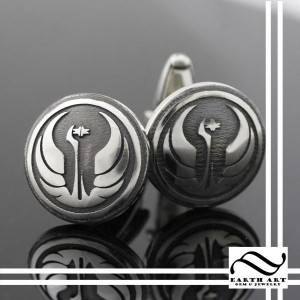 Dave loves them, and he can’t wait to wear them at the wedding. 🙂

Next came the search for wedding bands.  My wedding band was easy; I just picked a band that matches my engagement ring (close enough anyway).  Here she is: 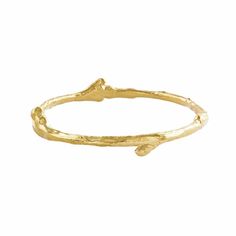 Dave’s band, however, was more complicated. Dave doesn’t like jewelry in general and really doesn’t like having things on his hands.  I am not fussed about whether or not he wears a ring, but his parents were pretty insistent that he wear a ring.  After receiving a mild talking-to he decided that he would, at the very least, try wearing a ring. Then, the hunt for the ring was on.

I wanted Dave to have a band that he really likes.  I figured it he likes the ring, it will be more appealing to wear it. Luckily, Dave has many interests, so finding a design he would like sounded like a piece of cake.  My first instinct was to get him a ring that matched his cufflinks. But, Dave wasn’t interested. Then, I started looking at Zelda designs since I know he loves Zelda; plus, who can resist a chance to have a ring inscribed with “it’s dangerous to go alone?”  These were better, but still not what he wanted. 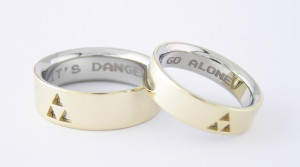 Dave is a man of few words.  To complicate things, many of his ‘words’ are cleverly disguised as grunts and sighs.  Normally this is not a problem since I talk enough for the both of us and probably several additional people. The problem became that Dave was not quite sure what he wanted.  And then, when we got closer to what he wanted, he wasn’t very good at verbalizing the difference between what was good about a design and what he wanted to change.  This is probably because Dave has very little interest in jewelry to begin with, which I don’t blame him for, and it gave us something to collaborate on as partners, which is the whole point of being married, right?

There were many designs that I showed him that he liked, but that were not quite what he wanted.  But, since he didn’t know how to say what changes he wanted, he instead made this sound of mild disapproval.  I call this sound “murr”-ing. It turned into a game of Pictionary. I would show him a picture and ask if it was what he wanted. He would say it was fine, then murr at me.  Despite the intense murring, I eventually managed to find this design which was so close to what Dave wanted that it became easy for him to pinpoint what about the ring he liked, and what he wanted to change.  This is the design we landed on: 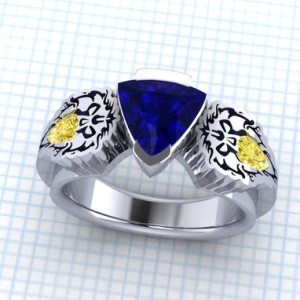 Allied in Love by Paul Bierker

Dave loves paladins, and always plays a paladin character. But, he has moved on from WoW so he didn’t really want a WoW-related ring.  He wanted something more generally paladin-esque. So, I decided to reach back out to Austin Moore to see if he could create something paladin themed for Dave’s wedding band.  We actually had two designs made because we were having some trouble sussing out the details and were debating the cost. 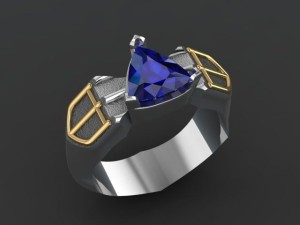 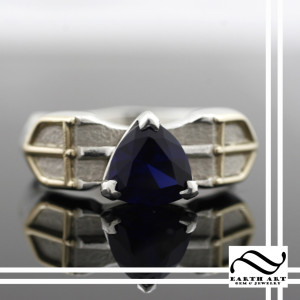 Now I have Dave’s cufflinks and wedding band sitting on my desk at home, just waiting for our October wedding!

*Technically, we are already married. We got our marriage certificate after getting engaged in February, but are having our wedding ceremony in October.