Saying Yes To the Dress

After becoming engaged, one of the first things I did was start looking at dress pictures. What can I say? I love fashion, and the ultimate fashion statement is the wedding gown. After a few weeks of mooning over dresses, I narrowed down my interest the below three dresses were my ‘dream’ dresses – they all had elements that I loved, but were far out of my price range. While they were out of my range, they gave me a good idea of what I liked in a dress. 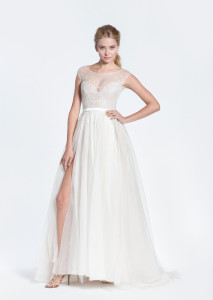 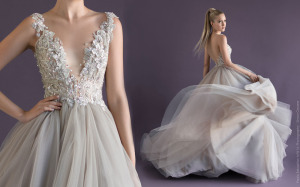 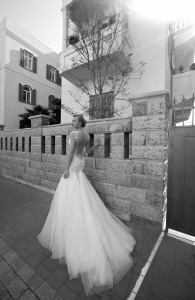 From there, I started looking into bridal stores, and comparing their offerings against the expensive designer gowns that appealed to me. So, armed with a battalion of photos and some preconceptions of what would and wouldn’t look good on me, I made appointments at three local bridal shops in early October.

My first appointment was on a busy Saturday at a David’s Bridal in Jacksonville. I say appointment, but we actually just walked in and got very lucky. I learned a lot about wedding dresses that day, and especially about what kinds of dresses looked nice on me. The one thing that I thought would look bad – dropped waists – actually looked really nice. The dresses I assumed I would love just didn’t do it for me.

This was the dress that my Mom and Grandma fell in love with at David’s Bridal. It looked pretty good on me (Grandma was ready to buy it then and there!) but I felt like it made me look older. I love a good old Hollywood style gown, but I didn’t want to feel old on my wedding day. Plus, my vision had more of a tulle, faerie airy garden feel. 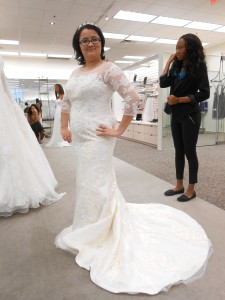 Next, we had an appointment with The White Magnolia. We arrived a few minutes early, but didn’t come in until right at the appointment start time since we knew they are appointment only and often very busy. Unfortunately, the bride before me wasn’t quite done with her appointment and we ended up waiting half an hour. We had been asked when we made the appointment if we wanted champagne, and I said yes, but we weren’t offered any. It was a disappointing start to what I was really hoping would be a special experience.

When my appointment finally started, I tried on quite a few dresses that looked good, but got caught between two dresses. One was a fabulous mermaid, and the other was the dress I actually ended up purchasing and fit my vision of a light and airy faerie tulle gown – which shall remain nameless so that Dave won’t see it by accident! I saw the mermaid and fell in love at first sight, and liked how it felt on but I wasn’t a hundred percent convinced. 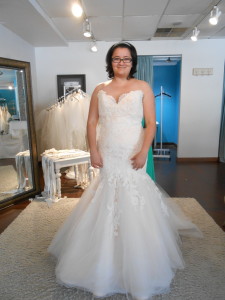 The distractable mermaid dress that I didn’t buy.

You see, I always thought I would be the kind of girl who had a ‘moment’ when they found the right dress. I was waiting to look in the mirror and suddenly become overwhelmed with joy and tears. That’s not what happened for me. I looked at myself and felt satisfied, that the dress looked nice, it fit my vision, and was in my price range. I was content, not overjoyed. So, I went home and slept on it. When I woke up, I looked at the pictures my Mom took of myself in the two dresses, and realized that the mermaid just wasn’t for me.

A few weeks later, my Dad and I made an appointment to go back to The White Magnolia and look at the dress, as Dad had very generously agreed to pay for my dress. I specifically asked for the champagne this time when I made my second appointment (the previous time the appointment setter asked me, which is their usual procedure from what I understand), and unfortunately when we arrived it wasn’t ready – but this may be because we did come in a few minutes early (roughly five minutes) and the store hadn’t really set up yet. Despite this unpreparedness on the store’s behalf, putting on the dress and seeing myself in the mirror, and the way my Dad looked at me, sealed the deal for me. Dad surprised me by paying in full for the dress that same day.

Now, although I tried my dress on with a nude slip, I ordered a white one. I agreed with my Mom who felt it would feel more bridal. But, in January I had a moment of panic wondering if I made the right choice, and tried to call the bridal shop to change the slip color. Apparently this isn’t an uncommon occurrence, and the Kerri from The White Magnolia was very kind and understanding about my sudden case of dress regret. She told me that if the dress was in production, we couldn’t make any changes, but she also assured me that if I didn’t like the slip after I saw it in person that I could buy an additional one in the nude color from the designer.

Fortunately, my dress was already in production and the color couldn’t be changed. I say fortunately, because the white slip was definitely the right choice! The dress came into the store in early February and once I got to see it and try it on, everything was right again with the world.

We took the dress home and it has been stuffed into my closet ever since. I’ve been working hard to lose some weight, so in a few months I’ll make an appointment to have my dress altered – both for my short stature, and for my (hopefully!) slimmer figure.