Of Diamonds and Rings

Now that our Engagement has been announced, I figured it would be a good time to start blogging about the engagement an wedding planning process!

Dave and I didn’t have a typical engagement. There was no bended knee and roses. It was over a Skype call after I returned home from a visit to Canada. We were distraught at being apart again and wanted to start a life together. We couldn’t think of any reason why we wouldn’t want to get married, and it would make it easier for me to immigrate to Canada – which we had already been planning. So, why not? We love each other. Let’s get married.

That was in September 2014. On Valentine’s Day 2015, I finally got my ring. Having the ring made was a wonderful, and occasionally stressful, process – but I wouldn’t change a thing.

When we started looking at rings, I basically knew what I wanted. My favorite jewelry designer is UK-based Alex Monroe, so deciding on a designer was easy. I was originally interested in the Wild Posy Twist ring pictured below – but it wasn’t exactly what I was looking for. 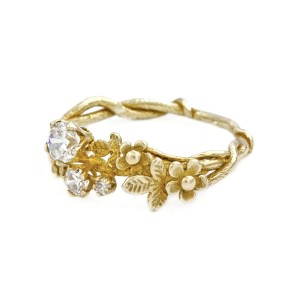 I got in touch with Susie from the bespoke area, and told her I was really interested in cherry blossoms rather than posies and she let me know that they had a past collection that featured cherry blossoms. I still wasn’t 100% sure if I wanted posies or cherry blossoms, and I’m sure I harassed her quite a bit, and got multiple quotes based on different designs and stones. Here’s a photo of the example ring with a stone for visualization purposes: 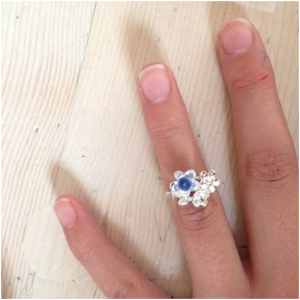 In the end cherry blossoms were just right. We decided to do stones in each of the flowers, have the flowers in rose gold and the band in white gold – to mimic the look of a cherry tree. I ended up purchasing a .47 carat lab created diamond and had Alex Monroe source two smaller morganites to fill the smaller blossoms. I think of the diamond as my science magic diamond.

We finalized our order with just enough time for Alex Monroe’s studio to finish the ring before Valentine’s Day weekend, when Dave was intending on visiting for an ‘official’ proposal. During production, Susie let us know that morganites at the small size required for the smaller blossoms were too pale a pink – basically clear – and suggested using pink sapphires instead. I was concerned about the cost difference, but Susie told us that since this was a change form our original quote that the studio would be willing to cover the difference to ensure we got the perfect ring. How sweet! We went with the sapphires, and I really can’t think her enough for making my dream ring possible.

We ran into some issues with customs – apparently a diamond traveling from the US to the UK then to Canada is a bit complicated – but in the end it safely arrived at Dave’s work, where he let his co-workers puzzle over the Mystery Box on his desk. Behold, the mystery box. 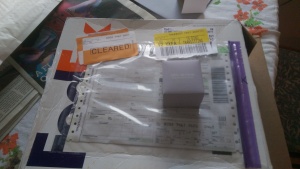 Dave proposed to me officially on Valentine’s Day in the morning. It was just the two of us, and we had fun surprising my Mom at breakfast. Without further ado, here is the completed ring – my precioussss! 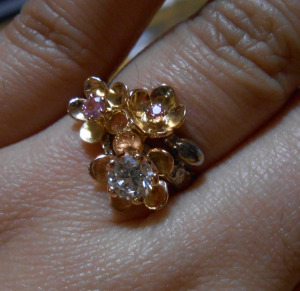 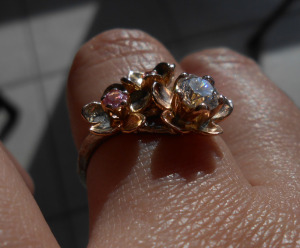